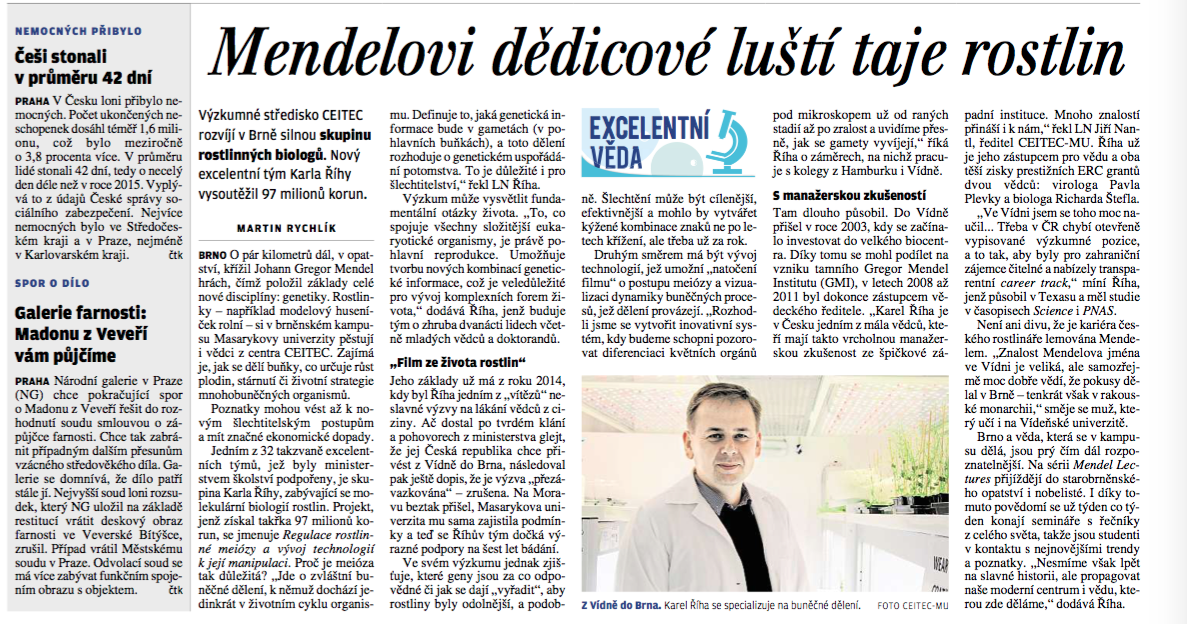 A few kilometers away from the Institute, in an abbey, Johann Gregor Mendel and his peas, laid the foundation of a whole new discipline: genetics. Now, in the new Brno Masaryk University campus, scientists from the institute CEITEC grow a different plant model, Arabidopsis thaliana (or Thale Cress). They are interested in how cells divide, what determines crop growth, ageing and life strategies of multicellular organisms. The findings may lead to new breeding practices and having a significant economic impact. Among the 32 so-called excellent teams, which were supported by the Ministry of Education, lies the group of Karel Řiha, who is involved in the study of plant molecular biology. The project, which received almost 97 million crowns, is entitled ”Regulation of meiosis in plants and the development of technology to manipulate it”.

Meiosis - why is it so important?

"It's a special cell division that occurs once in the life cycle of higher organisms. It defines what genetic information gametes (germ cells) will have. It is also important for breeding, "said LN Riha. “The research may explain the fundamental questions of life. “What unites all the more complex eukaryotic organisms, is just sexual reproduction. It enables the creation of new combinations of genetic information, which is all-important for the development of complex life-forms" says Riha, who is building a team of about twelve people, including young scientists and students.

"The film of the life of plants"

Its foundations already lie in 2014, when RIHA was one of the "winners" of the infamous challenge on attracting scientists from abroad for the soon to open addition to the CEITEC institute, in a new building to house plant focused research. Although he got, after hard competitions and interviews from the Ministry of Science, the support grant to move his lab to the Czech Republic, from Vienna to Brno, then followed by another letter that the award was canceled – the budget was overestimated. He came to Moravia anyway, and the Masaryk University itself ensured the conditions for team Riha to come, by offering a significant aid on six years of research. His research activity is, more specifically, to determine which genes are responsible for what and how we can "eliminate" them to be more resilient, and so on.

Breeding can be more targeted, efficient and could produce the desired combination of characters, not after years of crossbreeding, but maybe within a year. The second direction is to be the development of technologies which would allow "making a movie" about the process of meiosis and visualizing the dynamics of cellular processes that accompany division.  “We decided to create an innovative system where we will be able to observe the differentiation of flower organs under the microscope since the early stages until maturity and see exactly how gametes with evolving, "said Riha about the intentions behind working with colleagues from Hamburg and Vienna.

This was a long road. He came to Vienna in 2003, when the city began to invest in large Biocenter. As a result, he could participate in the development of the local Gregor Mendel Institute (GMI). From 2008 to 2011 he was even deputy scientific director. "Karel Riha is one of Czechia's few scientists who have such a top managerial experience of leading Western institutions. He has brought a lot of knowledge to us", said George L.N. Jiri Nantl, director CEITEC-MU."

Riha is already the Deputy for Science in the Institute and also enjoyed the honor of having gained the HRC prestigious award along two other fellow scientists: a virologist Paul Plevka and biologist Richard Stefla. “In Vienna I have learned much... Maybe there is a lack of openly announced positions in research, so as to be accessible to foreign applicants and offer a transparent career track," mentioned Riha, who worked in Texas and had papers published in the journal Science and PNAS.

“It is not that surprising that the career of plant science in Czechia is so associated with the “brand” Mendel. Mendel’s name is well known in Vienna however we all know off course that his experiments were made in Brno – even if at that time the city happened to be in the Austrian Empire", said with a smile the scientist who taught at the University of Vienna.

“Brno’s science campus can be said to be the result of a noticeable budget invested in it. The Mendel Lectures series attracts even Nobel Prize winners to the Old Brno Abbey. Thanks to this awareness seminars are already taking place every week during semesters, with speakers from around the world, so that students are in touch with the latest trends and knowledge. But we must not cling to the glorious history, and instead promote our modern center and the science that we are doing here, " concluded Riha.

Genomics and Proteomics of Plant Systems